This is the first in a new, regular feature for us here at the Labs as we celebrate all that is good in the Glasgow electronic music scene. Its fair to say that it is an extremely vibrant time for electronic music in the city and our new feature aims to cover both the smaller nights, DJ’s and producers as well as some of the bigger ones.

We are delighted that for our first feature we have the guys from a club night called Stay Plastic giving us the lowdown on what they are up to, what tips they have for new upcoming producers as well as giving us two exclusive tracks from Photonz and Meschi. They have also supplied and exclusive podcast which now forms part of our new Test Tube series.

These guys are real “heads” who have a passion for electronic music and can be found attending many different styles of night as well as running their own. They also know how to have a damn good party, something which is evident when they put a night on themselves.

Download Stay Plastic’s Test Tube mix or stream via the nifty Mixcloud player below (jump to tracklist) and read on to hear what they had to say.

Who is involved in Stay Plastic? 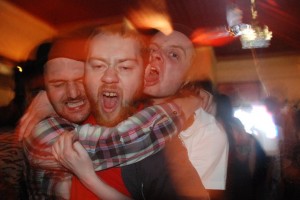 What inspired you to start your own nights?

We all basically became mates through our interest in electronic music and going to various different club nights over the years. The night it’s self originally started as an occasional thing about 5-6 years ago and the idea behind it then was just somewhere for us and our mates to go to listen to good tunes and have a laugh, we only ever ran 3 or 4 nights like that. About a year and a half ago after a lengthy hiatus we decided we’d start it back up again but this time with the intention of showcasing the artists and DJ’s that we were listening to and thought other people should be listening to.

Expect old and new Techno, House in it’s various different forms, some Electro, Garage and some of the up to date stuff that’s coming out of the UK, whatever thats being called at the time. Musically we’re all pretty open minded and have over the last year and a bit had various flavours through the door. In the current climate there is such a hybrid of sounds that it’s now starting to incorporate all of our interests, it’s a pretty healthy time.

You have built up an excellent relationship with the Photonz guys who have given us an exclusive tune. How did that come about?

Marco and Miguel’s work first came to our attention a few years ago with their releases on The Republic Of Desire and the now sadly defunct Dissident label. Tunes such as “No Fear”, “Compulsion” and “Glass Onion” had us hooked immediately and when we started the night back up again they were the first folk we contacted to come over and play. Unfortunately the initial attempt didn’t go so well, their set was amazing but it was bad timing for us and as a result there was a bit of a low turnout. Luckily the guys loved the venue and the city (including their fabulous hosts) and despite the low numbers the first time round they were delighted when we asked them back to play at our NYE party. Needless to say it was a different story this time around as anyone who was in attendance will verify.

The guys love the Glasgow attitude and musically we all had similar interests that range from old Jack Tracks to current House/Techno and UK stuff. They can’t drink for shit though!

What’s coming up for the Stay Plastic squad?

First off we’ve got Steve Rachmad (aka Sterac) on the 13th May down in La Cheetah. We’re delighted about this as the guys an absolute hero of ours and to see him in a small venue will be something else! This will be followed by an after party at an as yet undisclosed location with some of Glasgow’s finest spinners coming down to help us party till we drop.

We’ve got a few other big things in the pipeline which we’re going to have to keep under wraps for now, let’s just say watch this space!

What tune is your current dancefloor filler?

Sidrad: Risse – House Train. This always gets a positive reaction and has been getting severely rinsed by all of us at the nights. If you don’t know it, get to know it.

Wardy: Shake Shakir – At The Bonnie Brook (Photonz Lisbon Funk Remix). Been playing this out as often as possible and it goes down well no matter where you play it.

Danceaff: Azari & III – Reckless With Your Love. Heard it on a Kink and Neville Watson mix a while back and it’s been buzzing about my head since.

Azari & III – Reckless With Your Love

Any acts bubbling under at the moment that you think are gonna be big?

On a kind of House/Techno tip, our man Meschi (supplier of the other exclusive tune below) comes highly recommended. If you get a chance to see his live set, we suggest you do so. Meschi – Just For You by Phuturelabs

Also worth checking out is Alex-Ander, so far he’s had a digital release on Glasgow’s Pest Control label but he’s got a lot more up his sleeve.

On a UK tip, been really digging the stuff coming out of Glasgow of late. Guys like Koreless, Auntie Flo, O’Jay Boulevard and Bamboo Palace all have very unique sounds and we can see big things happening with them.

If you were to be transported to a Lab in the Phuture and a mysteriously crazy scientist were to grant you one superpower – which would you choose?

Sidrad: I think we have already had this discussion with our group of friends. It was decided that my superpower would be the ability to produce a king size bed with memory foam rest assured mattress at any given time.

Danceaff: Definitely the ability to teleport, so I’d never have to walk up Sauchiehall Street again.

Wardy: I am already a wizard, I do not need any more power! It was my spell that transported us to this Lab in the Phuture in the first place.

Partial to a funk re-edit and an Islay Malt. On Google+ and Twitter for the exchange of idle banter.

Related Posts
Rob Base & DJ EZ Rock – It Takes Two
As other Friday begins and the weekend approaches I feel myself drawn towards the hip…
Droppin’ Science – Volume 1
Danny Breaks has always been one of my favourite producers, from his early classic rave…
Cosmin TRG – Tower Block/Breton Brut
Cosmin TRG are back on Hemlock with this double a side banger. Funky shuffling undertones…
Phuturelabs Social
Ads