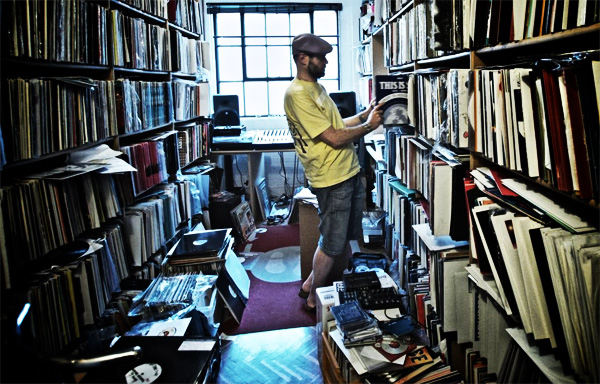 Dave Lee AKA Joey Negro is without a doubt one of the most respected names in the world house, disco and garage. From his early days running Republic Records and putting together the classic “The Garage Sound of New York” album in 1988 to his countless productions and remixes under many a moniker including chart-troubling tunes as Jakatta, The Sunburst Band and many more.

His extensive knowledge of house music has once again been pooled to put together a compilation album, this time digging deep into the world of Italo House for his own Z Records. The “Italo House compiled by Joey Negro” album sees the DJ delve into the deeper side of the sound for some of the genre’s finer moments that have previously lacked exposure.

Check the preview below and ahead on over to the Z Records site for the full tracklisting ahead of the compilations release on double CD and limited edition double vinyl on the 19th of May.

My introduction to the music of Joey Negro came with his rework of the Reese Project’s “Direct Me” in 1991. I was absolutely blown away by his take on the track and since then have been an avid fan of his work.

As he’s renowned almost as much for his classic remixes as he is his own material, I thought it’d be nice to catch up with the man himself and ask him what HE thought makes a good remix and asked him to pick out some of his favourite reworks of his own material from over the years.

Over to the man himself…

Hot Todd is Chris Todd from Crazy P and “Taste the Groove” was originally a broken beat type funk track from the 4th Sunburst Band album “The Secret Life of Us”. Chris programmed new 4/4 drums and added a housier bass line in the first half and all the rest of the parts are from the original but chopped around and edited.

I much prefer it to my version and know from experience that doing something different and creative with the original parts is often harder than ditching everything but the vocal and starting a completely new track.

There is sometimes a golden period when a remixer/producer is really making their name and has a few outstanding releases over a fairly short period. I’d liked Âme’s earlier single “Shiro” from their first album, then they did an excellent deep hypnotic Roy Ayers mix for my friend Pete at BBE. I thought they’d be a good choice to remix my new Akabu track “Phuture Bound”. Their fee wasn’t what you’d call high though maybe more than I expected but Pete told me his remix had sold well for the label so I stumped up the dosh and went for it.

Almost straight after they they agreed to do the mix their enormous single “Rej” came out which immediately created a huge buzz for them and I was super glad I hadn’t procrastinated too much.

Frank and Kristian didn’t use much of my original, just a loop of of the background vocals and a “Lost in the sound” vocal line from the lead over a slightly French Kiss-style electronic groove. As with Dennis Ferrer their stuff is sonically excellent and thoughtfully arranged, so their wasn’t any suggestions about changes from me. I remember hearing Danny Howells play the it at over a massive sound system and it sounded great.

I was very lucky to get this mix.

I almost completed a cover of “Keep on Jumpin” in the 90s but before I’d finished it both Todd Terry and Lisa Marie Experience had released well received versions, so I put mine on hold. I’d pretty much forgotten about it until I was looking on a DAT for something else in 2010 and thought maybe I could now utilize it, as I’d recorded all the parts.

Personally I’m pretty sick of the track now, so I thought it was better to get someone else to do all the work! Luigi Rocca had some success on Beatport with disco sampling material and he was up for it. Though it was good his first mix was too dubby and abstract so I said I needed something a bit more straight up big room disco house, with drops and builds. Some releases are done for love and you forget about profit but I saw this remix as a potential income generator for the label – I even toyed with using Income Generator as the act name but then thought it might be off-putting and jinx it. After a bit of surgery we had a strong version, Luigi had delivered just what I was hoping for.

We scheduled it in for a couple of months time at the beginning of summer. Then 2 weeks before our release another version came out from the Urbana label – and it seemed to be pretty good and was selling well enough to already be in top 10 house chart. I thought we were f**ked but there was no point not releasing as I had invested a fair bit of time and money into the project by then. So it came out as scheduled and over the course of a month or so the ZR version slowly climbed the Beatport house chart overtaking the other version and eventually ending up at number 1 on the main chart.

I’d remixed Love Hangover twice on the 90s – firstly the original Diana Ross version then a cover by ex Chimes singer Pauline Henry. I think I was away somewhere and needed to download a copy for a gig but neither was available to buy digitally, so I decided to cover my remix with Diane Charlemagne re-singing the lead.

I kept my versions pretty close to what I had originally done but felt I needed a fresher take on it for release on ZR. A few months earlier I’d agreed a mix swap with DJ Spen and he’d said he wanted to have a bash at “Love Hangover”. It was probably because I was too close to it but I struggled to see what he could do with it however I was pleasantly surprised when it arrived.

He’d looped up the guitar part and paired it with a Dennis Ferrer type slightly techy house groove to produce something that sounded modern but still retained the originals disco soul energy. It was the definition of a good remix.

My original “Sounds in the Air” was b-side of a Z Factor single in 2005. I always liked the Jomanda vocal sample and thought it was a good hook for an old school type house track. When it originally came out for some reason we only promo’d the A side “Rock Your Body”, and initially released a single sided 12″, so “Sounds in the Air” was just on finished copies and got missed by many.

I’d liked Martin “Soul Purpose” Ikin’s releases like “I Can Feel It and “This Is House Music” and asked him for something along those lines and sure enough he did a super cool 90s garage type mix, well before the current trend.

He even got the vocal sample resung, which sounds much clearer than before. It was immediately very popular and one of our best selling releases of 2012. I think when commissioning a remix its important to give the remixer some pointers on what you are expecting and other things they’ve done that you like. personally I prefer that when I’m doing a remix, as it’s always best everyone is on the same page as to what the end result will be. The last thing I want is to deliver something and the label say “we were hoping it’d would sound like ‘x’”.

“Another World” is basically a house mix of the Jakatta track “The Other World” from the Visions album. The original is more on a chill out tip and based around a John Barry-ish chord progression.

I had a decent budget to make that LP for Ministry so we’d been able to indulge ourselves by recording some gorgeous live strings with a full orchestra – arranged by Nick Ingman. I’d loved Andre’s track “Where are You” and asked him to do something along the same lines but using the the live strings and he did exactly that.

It’s a majestic combination of techy drums and bass with live orchestration and musicality.

The Sunburst Band – Journey to the Sun (Dennis Ferrer rmx)

I was trying to get Dennis to do a remix for ZR for ages. over the course of time he’d become pretty popular and was busy on the road, so therefore very selective about what he took on. After a few passes eventually he said yes to “Journey” – probably just to get me off his back!

The original is jazzy disco in the “Thousand Finger Man” mould with lots of live playing, strings, brass etc. It took Dennis a while to do the mix and when he eventually sent me it I have to say I was a little underwhelmed. I guess he had made a lot of very original tracks around that time that didn’t sound like anything else he’d done before. The mix sounded ok but not as trail blazing as we’d come to expect.

I spoke to Dennis and I was honest with him as I know he doesn’t have a fragile ego and he agreed it wasn’t amazing and said to leave it with him. he sent he the new version a week later which was totally different and superior from the drums up and all these fat synth riffs bouncing off each other – it’s funky techno for want of a better description.

I still think this mix is a pretty original piece of house music, can’t really think of anything that sounds like it and of course it was incredibly popular across the board with many different styles of Djs. Thank you Dennis for not bailing on me when others would have.

This piece was supposed to include more remixes but I wrote too much on the above to include all of them so I’d also like to say respect to Afterlife, Rainer Trubey, Kyodia, Sean McCabe, Audiowhores, Shur I kan, Richard Earnshaw, Grant Nelson, Andreas Saag, Cool Million, Rhemi, Andre Crom, Supanova, Yamwho, Directors Cut and Dave Spoon.

And just to see us off, how about a free download of a Joey Negro edit of a Carrie Lucas funk classic? Aye go on then.

With four years of releases for Delsin and it’s sister labels under his belt, the…